While standing over the greasy bodies of two recently dispatched wolves, and still trembling from the first real fight of my life, the ground around us was overtaken by an enormous and terrible shadow.  That shadow belonged to a mountain of a man (a half-Orc to be exact), who had set out on the same path as us, only a few hours earlier that day.  I believe that I had intended to thrust at him with my rapier, purely in the heat of battle, but found instead my empty hand extended in a mimed act of friendship.  I clearly had been more inebriated than I had thought!  Luckily, the half-Orc took my hand and introduced himself as Dirge, and did not disembowel me in the slightest!  After exchanging a few pleasantries, Sir Entwhistle and I (and Gjorn) agreed to allow this intimidating figure to accompany us on our quest to find the missing (and probably violated) boys. 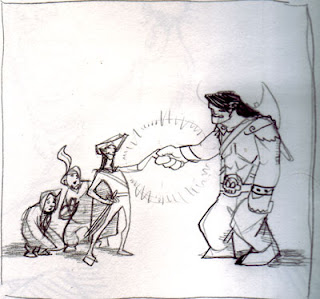 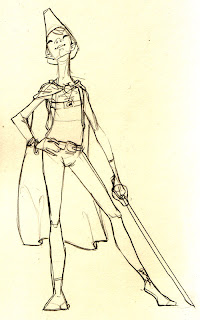 Adventurer's Journal of Caterwail - Day 1
Let me preface that I am quite sure that my memoirs will be edited for posterity's sake (to preserve only the most impressive of my heroic feats), so I’ll speak bluntly here.  If any person or creature is to wander across these writings, I implore you to destroy them immediately!  I would rather have my quests (and inevitably heroic death) told by future cultured storytellers than some seedy tell-all.

Anti-Mations (my animation channel on Vimeo)

A Festival for the Eye Sockets!